In the last post, I took up Grahame’s request for feedback on possible alternative syntax for extensions. To review, the goal would be to eliminate the use of the <extension> tag and use readable names, similar to the way core elements are represented. It may or may not be possible to improve on the current representation, but it is worth investigating. In the last post, I listed the following requirements:

Let’s take stock of the current DSTU 2 representation in terms of these requirements:

As expected, the current approach meets the essential requirements. The negatives are primarily the ones we are trying to overcome, i.e., needing different representations for “normal” elements and extension elements, and perhaps also, not using existing standards to the maximum degree.

What of Grahame’s alternatives? The following table shows how they stack up against the requirements.

So Grahame is correct that these four alternatives aren’t better than the current option. But, nonetheless, there might be other options out there.

Next time: Are there better options? 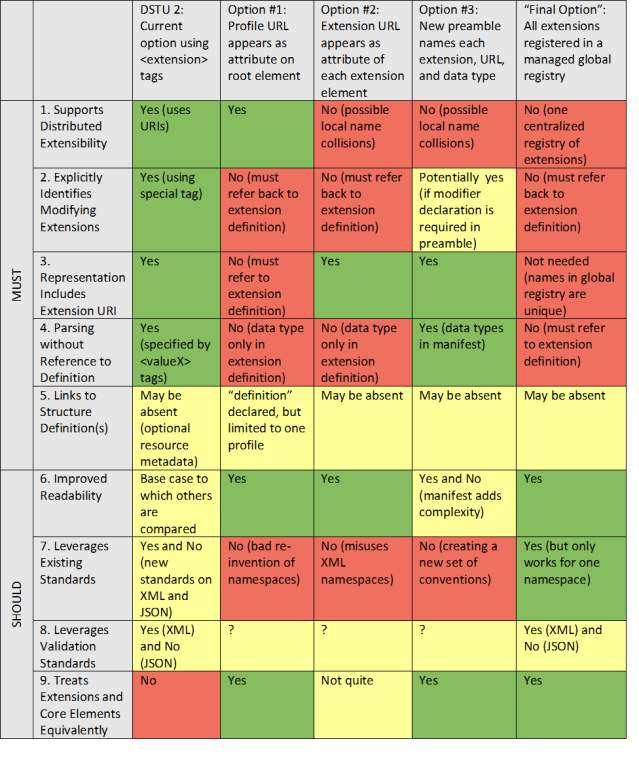 Mark Kramer is Chief Engineer for MITRE’s Health Innovation Center. Over 10 years ago, Mark's work on hData helped establish the principles for RESTful APIs in healthcare, now used in FHIR. Mark also originated Synthea, the widely-used synthetic health data simulator. Formerly an Associate Professor at MIT, Mark’s publications in the areas of healthcare, data analytics, machine learning, modeling and simulation have been cited over 8500 times.
View all posts by Mark Kramer →
This entry was posted in Uncategorized. Bookmark the permalink.